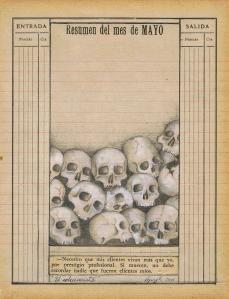 I have this wee piece (although it won´t be like this as it will be printed in 2 tones black and gold, i think) in the show below! Of course the first thing that came into my mind about the theme “Collectionistas”, was skulls..no idea why..haha!

… Records played by connoisseur record collectors and refreshments will be available.

I love the obsession inherent in collecting. The completist, whether finding that all-important last football sticker to finish their sticker book or one of those committed men (more often than not) standing on a rainy platform furtively scribbling down train
numbers. The amateur hobbyist, complete with vast selection of frogs/bottle tops/records/paper fruit wrappers/tram tickets/ whatever; I always admired those kids at school who had a million different shaped and coloured erasers (they were called
rubbers then, before Aids)… I loved their dedication and their neatness and I got dizzy just trying to imagine how much pocket money they got… It´s all valid!

There something religious about this devotion. It´s repetitive, inspiring and, well, ultimately pointless. Long live the anoraks!

Prints will be on sale on the day and at The Mill Co. Store.
The Mill Co. Project
Lime Wharf, Vyner Street
London, United Kingdom

Lisa Gingles is a Northern Ireland born, Valencia based artist. Having studied Fine Art in the University of Ulster, Belfast, she moved to Valencia, Spain in 1998. She has exhibited over the past few years in Spain, U.K, Ireland and N.Ireland. Lisa´s work is mainly made up of small drawings and collage using old book covers and there ripped out pages as a base. " The artist´s works conjure a bewitching world of eerie fairly tales and ancient folklore, a world where both menacing and benign forces of nature are at play" Sunday Business Post, 9th September 2012, Susan Morrel. View more posts